I am hosting the promo blitz of Mother of Demons by Maynard Sims today on my blog. 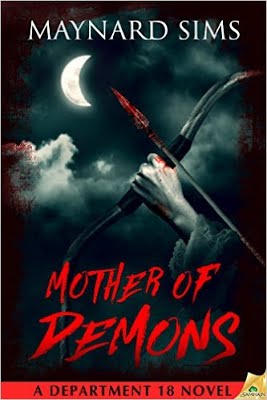 Alice Logan has gone missing, and Harry Bailey and Department 18 have been called to help find her. The main suspect is Anton Markos, a satanic cult leader who has a predilection for young women like Alice. Members of Markos’s cult start turning up dead—shredded by what seems to be a wild animal. Is there a madman within the cult? Or is it something far more horrible?

Can Department 18 discover the impossible truth and end the spree of murder, insanity and carnage? Or will they become the prey?


High above street level in Clerkenwell she climbed up to the balcony’s railing and rested her naked foot on the ice cold metal. A brisk wind was coming in from the east, gusting across the balcony and raising goose bumps on the girl’s pasty white skin. From inside the penthouse the four boys watched her climb.

“Go, girl,” one of the boys – Finbar Clusky – called out. The other three laughed.

“Where’s Erik?’ another of them – Terry Butler – said. “Shouldn’t he be here? This is for his benefit, isn’t it? Hey, Alice. Don’t jump…not yet. Your main audience isn’t here yet.”

The girl glanced back into the room. “I’m not going to jump, silly. I’m going to fly. I’m going to soar, above the clouds, to the heavens. There I will take my rightful place with the other goddesses.”

“Is that what you are, Alice, a goddess?” Davy Coltrane said.

“I am Artemis; goddess of the moon, goddess of the hunt. And once I’ve taken my rightful place in the heavens, I will hunt you all down and make you kneel before me.”

“Not Artemis, my love, but Hecate, the goddess of sorcery and magic.”

All eyes turned to stare at the speaker: a man, older than all of them: handsome, with a chiseled Mediterranean face and piercing coal-black eyes. They all shrank back in their seats and cast their gaze to the floor. All except the girl who, from her perch on the balcony, looked at the man, her eyes clouded with confusion. “But, Erik, you’re here. I thought you had gone away.”

He smiled at her indulgently. “I know,” he said. “I know you can fly. You can soar, as high as a bird, more graceful than an eagle. You don’t have to prove it to me. One day we will fly together.”

She looked uncertain. “Do you promise?”

“On my life.” Erik Strasser bent low and whispered in Finbar Clusky’s ear. “How much did you give her?”

“The usual amount. Nothing excessive.”

“But now she believes she’s a bird,” Strasser said.

“No, a goddess,” Mikey Gibson said, trying to lighten an atmosphere that had suddenly turn to stone.

Strasser silenced him with a look and turned again to the girl. “Come in now, my darling. Come in and get warm. Your skin is turning blue.”

Alice looked at him questioningly for a moment, then down at her naked body. She shrugged, stepped down from the balcony, and took a step inside the penthouse. Strasser reached forward and wrapped his arms around her shivering body. Gently he led her through to the bedroom and laid her down on the bed, covering her with a quilt, waited until her shivering had stopped, and then watched a tear trickle down her cheek.

“Erik, I want to go home,” she said, in a voice so small that he had to lean forward to hear what she was saying.

“And so you will. Tomorrow you can go back and see your mother, just as we discussed.”

“Of course. I give you my word.” He reached out and stroked her forehead, smoothing her long blonde hair away from her brow.

Her eyes fluttered shut and within a moment her breathing had deepened and she was asleep.

He stared down at her, a frown creasing his forehead, and then he stepped away from the bed and went back into the lounge.

“Who was responsible for that?” he demanded, his accent thickening as his anger increased.

“No harm in it.” That from Davy Coltrane.

“And that’s what you would have told the police once they’d scooped her body up off the pavement?”

“They didn’t mean anything by it, Erik,” Finbar said. “You’re over-reacting.”

Erik Strasser spun around to face him, his brow furrowed, his eyes blacker than ever.

Finbar grabbed his midriff and bent double as an icy hand gripped his intestines and started to twist. “Please,” he gasped. “Don’t.”

“Then whose fault was it? I left Finbar in charge”

“I was only having a laugh,” Davy continued. “I didn’t think the silly bitch would react so badly. I only gave her another shard. How was I to know she would go all goddess on us?”

Strasser turned on him. The skin of his brow had smoothed out, but the eyes burned just as deeply. “Get out,” he said in little more than a whisper. “Get out of here and don’t come back.”

The boy stood up to his full height and thrust out his chin to show he wasn’t going to be intimidated by Strasser. “Suit yourself. I’m going. This was a lousy gig anyway.” He turned to Finbar, who was slowly straightening up, the color gradually returning to his face. “I don’t go much on your choice of friends, Fin. Especially this wanker.’

Finbar gave a small, almost imperceptible shake of his head, but Davy, nostrils flaring in anger, ignored it. “I’m outa here,” he said, stalked to the door and yanked it open, slamming it shut behind him.

“Indeed you are,” Strasser said softly.


Minutes later Davy Coltrane was on the platform of Farringdon underground station, listening to the steady rumble of the approaching train.

The train’s headlamps pierced the gloom as it appeared from around a bend in the track. As the train pulled into the station Davy took a step forward…and then another.

The train hit him before he could fall from the edge of the platform. It carried his body along for a few yards until it slipped down the cold metal and disappeared under the grinding wheels.

All their short stories and novellas were published as a uniform eight volume collection in 2014 as The Maynard Sims Library.

They worked as editors on the nine volumes of Darkness Rising anthologies. They co-edited and published F20 with The British Fantasy Society. As editors/publishers they ran Enigmatic Press in the UK, which produced Enigmatic Tales, and its sister titles. They have written essays. They still do commissioned editing projects, most recently Dead Water, and they are working on an anthology as editors for the ITW. They also do ghost writing commissions.