Today I am hosting the virtual book tour of Riot of Storm and Smoke by Jennifer Ellision. I am reviewing the book for my part. Read on to know my thoughts. 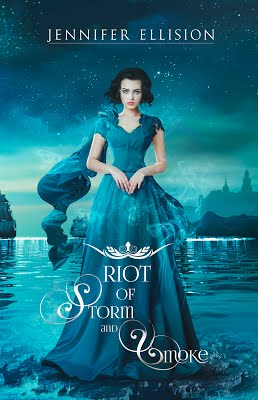 War draws closer, like a tide to the shore.

Bree and her friends have escaped the clutches of the Egrian King, but their troubles are far from over. Still reeling from the secrets that drew new breath when her father took his last, Bree sets off for the safety of Nereidium-- the kingdom she's just learned is hers.

But with the King's ire at its peak and war a certainty, Nereidium is no longer safe. As Prince Caden rallies the Egrian people against his tyrant father, Bree, Princess Aleta, and Tregle race to the Nereid shore to warn them of the incoming danger—and to put the Nereid Princess on the throne.

The only trouble there: Bree can’t bring herself to reveal that the Princess is her.

It’s not a dilemma she can waste time pondering. With a new weapon in his arsenal, the King's strikes are sure to be bolder than ever before. And Bree may not be ready to wear a crown… but she won't let her kingdom down without a fight.

A very good continuation to the first book in the series. But this too has only whetted my appetite for the world and characters abounding in the pages of this book.

The stormy book cover is very appropriate to the mood of the beginning of the book. Bree is angry and sad and prone to moody behaviour in the first part while Caden is busy making name for himself among his people as a people's Prince. Bree comes out a bit different from her ordeal which again adds to her strength of character. They travel different paths leading to the unfurling of their character traits layer by layer. Another person whom I loved in this book was Aleta who though, reads as a cold person, shows her vulnerable side more while Tregle, I think, comes into his power a bit more and is more confident than earlier. There were a few surprises among the new characters and the ghostly twist had me intrigued.

The pace of the story is steady and the tale kept me on my toes following the adventures of Bree and her friends fleeing from the King and the gathering of forces by Caden for revolting against his father. Though all scenes meshed together to lead to the climax, another cliffhanger, a couple felt superfluous to me. Then again that might have been my mind racing to catch up with the ending!

As for the setting, this is the book which is more about the "outer" world, about the people and the neighbouring kingdoms. This gives a pretty good picture about Bree's world and it felt a bit medieval in its feel. And the defiant stand against the Kind has increased my curiosity about Nereidium and her people!!

I am going to read the short stories based on this series while I am waiting for the third book. Is there any way to fast forward the time to 2016?? I can't wait at all!!

My one line review : A fantastic sequel with the characters and setting being revealed layer by layer.

Jennifer Ellision spent a great deal of her childhood staying up past her bedtime with a book and a flashlight. When she couldn’t find the stories she wanted to read, she started writing them. She loves words, has a soft spot for fanfiction, and is a master of the fangirl flail. She resides in South Florida with her family, where she lives in fear of temperatures below 60 Fahrenheit.