Today I am hosting the virtual book tour stop of The Tempest by James Lilliefors organised by Reading Addiction Virtual Book Tours. I am reviewing it for the blog tour and I hope you enjoy reading about it as much as I did reading it. 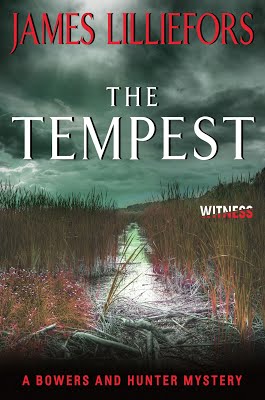 Tourists like Susan Champlain pass through the Chesapeake Bay region every year. But when Susan pays Pastor Luke Bowers a visit, he's disturbed by what she shares with him. Her husband has a short temper, she says, and recently threatened to make her "disappear" because of a photo Susan took on her phone.

Luke is concerned enough to tip off Tidewater County's chief homicide investigator, Amy Hunter. That night, Susan's body is found at the foot of the Widow's Point bluff. Hunter soon discovers Susan left behind clues that may connect her fate to a series of killings in the Northeast, a powerful criminal enterprise, and to a missing Rembrandt masterpiece, The Storm on the Sea of Galilee.

Whoever is behind the killings has created a storm of deception and betrayal, a deliberate "tempest" designed to obscure the truth. Now Hunter and Bowers must join forces to trace the dangerous secret glimpsed in Susan's photo. But will they be the next targets on a killer's deadly agenda . . . ?

A book which starts off as a simple open and close death case opens a can of worms leading  to a pretty complicated story.

The book blurb caught my eye inspite of it being too wordy. It might have gone good with the mysterious happenings in the book if it had been shortened.

The book started off with a mysterious discussion by Kepler. And that was followed by another mysterious event, Susan's death. From that point, the main story was started and what followed was a hide and seek search for the murderer and ultimately the instigator behind the killings and the art thievery.

The story was fast paced and the plot had surprising twists and turns and the final revelation of the murderer is the greatest of them all. I certainly didn't look at that character as the antagonist. Another surprise was the relationship between the 2 antagonists and I am not even sure if one of them is an antagonist because of his intentions though his actions cause him to be one. The events unfolded so fast that it was a bit of information overload at times but I was able to get over it easily and get caught up in the suspense of the story.

I liked Amy because of her drive to do the right thing by the victim's family. But at the same time, I felt she was a bit reckless. Luke was a surprising element with his insights and his wife more so because of her spot on conclusions. I even was suspicious of her for a while. I didn't know what Kepler would be about at any point of the story. There are 2 sane madmen who make all the reading worthwhile. The ending is where the entire back story is revealed and the beauty of the entire scheme comes into light.

The ending was kind of predictable in one sense while it was rather abrupt in another way. It was a very fast end to the antagonist whom I was looking forward to be brought before everyone. The story also laid bare the workings of a close community.

Overall, the book was enjoyable and kept me immersed in its pages and I think there will be more Amy-Luke in the future hopefully. Now I am going to check out the Psalmist which I haven't yet read.

My one line review : A captivating mystery which has you clinging to the pages till the end.

James Lilliefors is the author of the geopolitical thriller novels The Leviathan Effect and Viral. A journalist and novelist who grew up near Washington, D.C., Lilliefors is also the author of three nonfiction books. The Psalmist and The Tempest are the first two books in the Luke Bowers and Amy Hunter series.

And finally the giveaway!

a Rafflecopter giveaway
Posted by Floryie at 20:48