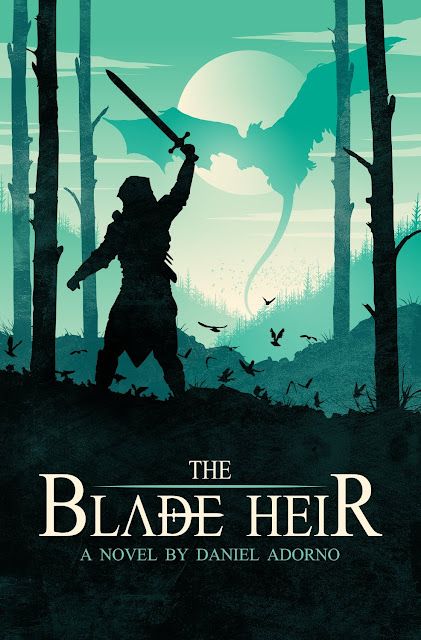 The Dragons Have Awakened...

Kraegyn, the leader of the dragons, has risen from the ashes. Lucius
Nostra suffers recurring nightmares of the black dragon. The frightening
dreams signal the ominous return of the dragon tribes that wreaked havoc
on the peoples of Azuleah. Confused and uncertain of his role in the
gathering storm, Lucius joins his elf brother Siegfried on a perilous
journey to reforge the Requiem Sword--the blade which once defeated
Kraegyn.

Lucius' quest will take him through the kingdom of elves, dwarves, and
faeries. Though he will gain allies on his quest and uncover secrets
surrounding his past, can Lucius survive long enough to stop Kraegyn's
ascension?

The Blade Heir is Daniel Adorno's first novel in a series of Christian
fantasy for teens and adults. This is an epic fantasy adventure readers of
all ages can enjoy.

The blue mist permeated the air once more and enveloped Lucius in the darkness of the land of Azuleah. Before him stood a great fortress, once prominent and awe-inspiring but now an empty shell of its former glory. Its towers stood ominously above him, dark sentinels beside the massive gate of the fortress known as Arkadeus. It was a sight to behold, both awe-inspiring and fearsome to Lucius.

From the outside, Lucius saw mist emanating from the open gate and he walked closer, entering the place where darkness dwelled and awaited him. He passed slowly through the mold-ridden doors. Once inside, he found himself at the outer edge of a massive courtyard with a fountain at its center. The blue haze surrounded him and radiated a surreal light within the courtyard. On each side of the front gate there were stairs rising up to the ramparts of the stronghold where tattered flags hung lifelessly from the sentry posts along the inner wall. Broken spears and arrow shafts lay strewn on the courtyard floor, evidence of a grand battle fought long ago. Beyond the aged fountain, there was an arched doorway leading deeper inside the halls of the old fortress. Every few seconds, the fog would billow out from the doorway like smoke from the mouth of a pipe. Lucius made his way to the entrance, fearing what lay within the bowels of Arkadeus.

He peered inside and saw a long corridor with oak doors on each side. The mist floated above the floor and cast an eerie light on the cracked and moldy walls. A stench hung in the air, and as Lucius continued inside, it grew fouler, causing his stomach to wrench. He tried to open the doors within the corridor, but they were locked. And after the third door, he gave up and followed the mist toward the end of the hall.

Lucius stepped through another arched doorway and found himself inside a room full of overturned tables, shattered pots, and broken chairs. The mist was thicker inside this room and the stench stronger. A doorway to the right led to a descending staircase, while the one to his left ascended to some upper level of the dark fortress. Another doorway straight ahead was blocked with rubble and refuse. He glanced to his right and saw the fog billowing from that doorway, so he crept closer toward it. The putrid stench filled his nostrils and nauseated him. His uneasiness intensified as he descended the spiral staircase, but he could not retreat—some force beckoned him further down. The blue, hazy light seemed to brighten more with each step he took. Deepening dread began to overtake him, and he feared what evil lay at the end of his descent.

The staircase ended in a narrow hallway where the blue light shone steadily. Lucius heard a faint whisper calling to him from a glowing chamber at the end of the hall. He reluctantly drew closer to the light. Its gleam enticed him, pervading his every thought. The walls of the hallway bore arcane inscriptions and runes unknown to Lucius. He stopped just outside of the room and peered inside.
The stench was now burning his nostrils, and he fought to keep himself from retching. Within the round room, a blanket of fog covered the entire floor. He examined the walls of the chamber in the blue glow and noticed dark stains along the porous stone surface. Rusty hooks and chains hung from many places in the room. In the center of the room, Lucius noticed a small bump protruding from the mist. He squinted his eyes to examine the object in the dim light and soon realized it was glaring at him. The bump had two unblinking, dark eyes peering above the mist, keeping a steady gaze on Lucius. He wanted to run and hide from the bump's relentless stare, but his legs were frozen in place.

The bump did not move, and Lucius did not look away, fearing any movement might bring about his end.
His fear kept him motionless. But after a few minutes, Lucius broke his stare and quickly looked around for any kind of weapon. He saw nothing except the swirling fog around him. His eyes darted back to the shadowy eyes at the center of the room. They had not stirred in the slightest. Lucius crouched down, keeping his eyes fixed on the creature before him. He ran his fingers along the cold, damp floor hastily searching for a weapon. His hand felt something hard. He quickly snatched it up and gripped it with his right hand, eyes still trained ahead. The object was light, but felt hard enough to inflict some damage to the creature with a powerful thrust.

He hesitated a moment before attacking the unblinking bump challenging him within the dancing blue cloud. With a yell, he dashed forward, raising his right arm over his head, ready to strike. But before he could smite his enemy, Lucius stopped abruptly and, to his horror, finally realized what lay at his feet.

A human skull upon a pile of bones stared blankly at him as he lowered his weapon. His heart thumped rapidly in his chest. He had never seen the remains of a man before, and it soon became apparent the chamber he had wandered into served a dark purpose. The round room was a dungeon of some sort, and the stains upon the walls were the blood of those unfortunate souls who had ventured inside. Panic swelled within him. He raised his arm to wipe the sweat from his brow and gasped when he saw his weapon was a thigh bone. He dropped it and frantically wiped his hand on his vest. The sound of hoarse laughter from above startled him.

Lucius looked overhead, but only saw a dark expanse. The laughter subsided, and a faint whisper called out his name. A chill ran down his spine as he searched the piercing darkness.
"Who goes there?" Lucius cried. There was no response. He trembled while he searched for movement of any kind. Nothing stirred.

Lucius stepped away from the center of the room, heading toward the staircase slowly. A metal squeak overhead followed by a thundering flap of mighty wings alarmed him. Strong gusts of air from above rushed all around his body. The fog was blown off the floor momentarily, revealing scattered bones and bloodstains throughout the dungeon. Lucius' knees buckled, and he hit the floor hard.

A guttural bellow resonated in the darkness. The foul stench finally caused Lucius to vomit. And as he did so, a huge beast descended upon him. Its large talons crushed the pile of bones underfoot with a thunderous crack. Lucius looked up to meet the behemoth's glare. Its eyes were intense sapphires shining through the dimly lit room. The monster stood upright on its back legs, spreading its wings at a span that nearly touched the opposite walls of the room. Its breath reeked of death and decay. Large fangs inside a jaw the size of a man's body formed a wicked smile on the creature's face. Black scales adorned its body, save for the monster's belly, which was a pinkish hue. The scales shimmered in the dark. And as the creature craned its long neck, they lifted to reveal gills like those of a fish. With a sudden jerk, the creature folded its wings and inhaled deeply. It opened its jaw and released the blue mist from its gaping gills. The mist floated down above the floor and once again filled the halls of Arkadeus.

"Lucius, you have come to me," the creature said, lowering its head and staring at him.
"What do you want with me, demon?" Lucius said, cowering before the monster, which let out another laugh.
"I am no demon. I am a dragon, fool! Kraegyn is my name, Lord of Arkadeus and of all the aeries of Ghadarya. Fear my wrath, Ellyllei."

A dragon? Tales of such great beasts had been told to Lucius as a child, but he thought the dragons had vanished long ago. "Please, Lord Kraegyn, have mercy. What does a dragon desire from me?"
"Mercy?" Kraegyn grunted. "Mercy shall do you no good, Ellyllei. Your flesh shall burn from the sapphire flame I spew, and none will remember Lucius again!"

Kraegyn reared up and spread his wings. The dragon's nostrils opened wide as he breathed in the fog in the air. He let out a fierce growl, and blue fire erupted from his jaw into the cavern above. The chamber's immense height was revealed in the crackling flame. The walls climbed nearly fifty feet, ending in an iron grate where the night sky peered through. Between the grate and the room below, dozens of steel perches protruded from the walls. Then they disappeared into darkness when the dragon exhaled the last of its fire and quickly crawled on all fours before Lucius.

Lucius ran toward the staircase, but Kraegyn anticipated his plan and slashed at the foot of the steps with the long claws of his wing arm. Lucius jumped back to avoid the swipe and stumbled, falling backwards on the bones of Kraegyn's victims.

"Foolish boy! You will not escape this chamber, save through dust and ash!" Kraegyn thrust his claw upon Lucius and pinned him with all his weight. Lucius yelled in pain at the monstrous weight. He struggled to free himself, but to no avail. He quickly realized he would die in the dark chamber and endure the same fate as those he now lay upon.

"Be still now, Ellyllei. You will be one with your fathers and share their doom!" Kraegyn said. The black dragon inhaled the remaining mist in the room and snarled as his jaws gaped open.

Lucius felt the blood drain from his face as flames ignited inside the dragon's mouth. Kraegyn lifted his talons from Lucius' chest and propelled the flame at his body. The fire singed his face and chest, delivering torrents of agony throughout his body. Lucius screamed, but his voice was drowned out by the sound of Kraegyn's laughter. Seconds later, darkness overtook him. 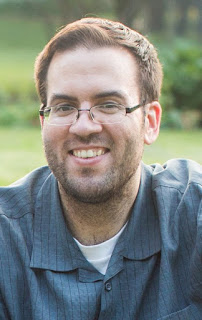 Daniel Adorno is a fantasy and sci-fi author who occasionally blogs about
the independent publishing industry. Daniel was born in Puerto Rico and
moved to the state of Florida at an early age. He earned his Bachelor's
degree in history at a private Bible college in Minnesota and went on to
earn his master's degree in ancient and classical history. One of his
short stories placed him as a finalist for My Faith Radio's 2013 Writer's
Contest.

When he's not writing, Daniel likes to read speculative fiction and create
digital art for book covers. Daniel currently resides in Farmington,
Minnesota with his wife and two sons.


The author is giving away free copies on his website. Do check it out!!

If they want to purchase paperbacks they can go here: