Today I am taking part in the review tour of Releasing the Demons by L.D.Rose. Read on to know my reaction to the book. 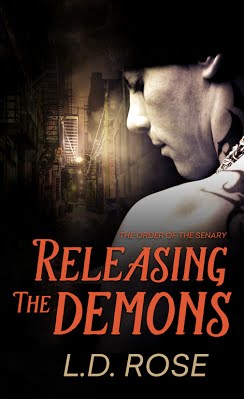 Blaze Knight has been through hell and back, but the nightmares aren't over yet.

Five years after Blaze was maimed by Cyrus Chimola, a powerful vampire with a penchant for torture, he’s still trying to pick up the pieces of his shattered life. As a genetically engineered mercenary with the ability to bend fire to his will and to see in infrared, Blaze’s mission is to protect what’s left of humanity. When Chimola and his crew return to the Bronx gunning for Blaze’s blood, Blaze is forced to face the demons of his past. Hell-bent on revenge, he seeks the help of Valerie Medeiros, an NYPD detective who manages to steal his heart and save his life in more ways than one.

Motivated by her sister’s gruesome death, Valerie has made it her life’s goal to bury every vampire in the ground where they belong. When she brings in Blaze Knight for suspected murder, she discovers he’s not only innocent, he isn't a man at all—he's a half-vampire hybrid working with a band of brothers for the U.S. military. Valerie has a hard time trusting anything with fangs, yet she quickly falls headlong into Blaze’s life, a life full of darkness and horror she can’t even begin to fathom. The bodies are stacking up, but Valerie can’t seem to let go of this hybrid, a beautiful monster filled with pain, rage, and passion unlike anything she's ever known.

In a world where the line between good and evil is blurred, Blaze and Valerie will find danger at every turn, risking everything they’ve come to know and love, including one another.

I went into this blind and came out with a touching tale of love and anguish.

The book name is perfect. It sums up the entire story beautifully. The book is a tale of suffering and inhuman strength, love and happiness. I read the book fast in one sitting and I am excited to follow the stories of the other hybrids too. This series has gone on my to be followed list as soon as I finished reading it.

I loved Blaze. He bottles up his emotions and feelings. The author brings out the anguish in his heart and also the good and bad parts of his character is shown without any soft talking about it. His past and his actions are described starkly without any compromise. And that made me fall in love with him. He doesn't make any excuses for his actions even when Valerie goes against him. And he is equally matched by Valerie who has also suffered but in a different way. This is a love story which blooms defiantly in the midst of sorrow and pain.

The author has treated the storyline well making it interesting with enough action in it. The hybrid characters reminded me of X-men. This is equivalent to reading about the heroic actions of a group of super heroes. It was like I was beside them during the fight scenes. The story flew and soon I was at the end of the book. I was sad to see it end on one hand but very happy for Blaze and Valerie on the other hand.

The relationships are shown well and it added the much needed levity to the story. The sibling antics among the Knight brothers and the friendly camaraderie between Val and Deron show a lighter vein to enjoy the characters too in their personal roles.

The story is well crafted and the narration was enough to keep me engrossed in the tale following their steps in the adventure to capture and kill Cyrus. I loved the way it played out at the end. I felt it was justice in its own way. So overall I was well satisfied with this book.

The romance was very hot between the protagonists. They literally scorched the pages with their heat and passion. As usual with paranormal romance, there are a few explicit sex scenes. Even though I love paranormal genre, I can never read through those pages. Sigh,that's only me!

In short, I can see myself reading the other books by this author. So hopefully I will see you guys over there browsing the sequels!

My one line review : A beautiful love story which blooms out of pain and suffering.

L.D. Rose is a neurotic physician by day, crazed writer by night, and all around wannabe superhero. She writes paranormal romance and urban fantasy, but she’s been known to delve into horror, sci-fi, and medical suspense on occasion. L.D. Rose is a member of the RWA, FF&P, NEC-RWA and CoLoNY. She currently lives in Rhode Island with her studly hubby, her hyperactive boxer, and her two devious cats.

And don't forget to take part in the giveaway!

a Rafflecopter giveaway
Posted by Floryie at 21:23