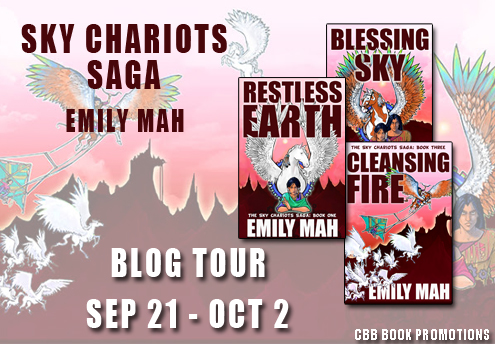 Welcome to my stop on the Sky Chariots Saga by Emily Mah blog tour by CBB Book Promotions. I am reviewing the three books in different posts for it. This is the second posting for the second book in the series. 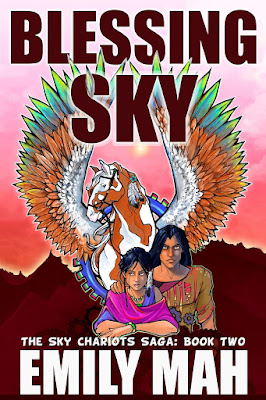 Master Engineer Kasha lives in hiding. As a Tanoa and a woman, she has no legal right to her title, and risks expulsion or even execution if the Guild discovers her identity. For over a year she has served as the City Engineer of the Andalano city of Solace, home to the Winged Riders and their pegasus mounts.

Now, though, her people need her. The last of their Earth Shamen is trapped in the mountains, holding back a volcanic eruption so that the rest of her people can escape. It is a job for only the greatest of all engineers, and that happens to be Kasha.

But when her kinsman, Ahote, breaks the most sacred law of the Winged Riders, an alliance with him means certain death. Kasha must work alone to solve the most difficult engineering problem of all time before the summer months are done and winter comes to claim the life of the Shaman and the hope of her people.

This is a very good continuation to the series. And it has increased my interest in the saga which I didn't think was possible.

I was a bit disoriented with the way the book starts off. But then I realised that the author has started at a different point in time from the finish of the first book. There was a few places where I had to think twice before knowing where I was time wise in the series. It wasn't that big a hindrance but it was a bit confusing. The confusion didn't stop me from enjoying the book though!

I just realised that I had forgotten to mention this point in my musings on Restless Earth. The point of view alternating between Kasha and Ahote is extremely good at making me see both sides of the situation and the incidents taking place to affect the entire picture. It is both convenient and a good approach story wise.

In this book, I have seen Kasha grow from just a person obsessed with her work to taking part in the cultural conflicts occurring around her more actively. Her struggle is clearly seen in the scenes and I like that she is leaning her support towards the Tanoa. Ahote stays true to his character and keeps showing his kindness to the Winged though it brings him nothing but trouble. I am waiting for hell to break out once the secret is out.

The story once again impresses me with its intricate plot and the cultural conflicts and ways which adds to the reading pleasure.

The elements which I loved in this book are Sky's interaction with Ahote and the scientific explanations given during Kasha's experimentation. The former appealed to me because of the humour and Sky's mischievous character while the latter because I was fascinated with the whole parachute and sky chariot invention and the research behind it. It totally got to my geeky part! I love reading about inventions so this book rocks for me!

The other main part of the story is the political intrigue. More of the politics and the way the various players are stationed across the battlefield are revealed in this book. I am getting an idea of the outer world and it has captivated me especially the Magistrate with his wit and hidden agendas. I am going to wait out to know what happens next in that context.

So basically  I can't say enough good things about the story and I hope fantasy and science lovers would give this saga a chance to touch their lives.

My one live review : A good continuation with appeal to fantasy and science lovers!

Emily writes as both Emily Mah (for science fiction and fantasy) and E.M. Tippetts (for chick lit). Her short stories have appeared in Analog Science Fiction and Fact, The Black Gate, and anthologies like The Dragon and the Stars, Shanghai Steam, and The Change: Tales of Downfall and Rebirth. Her E.M. Tippetts novels have been on the Amazon Top 100 numerous times, and her novel, Someone Else's Fairytale was semi-finalist for the Best Indie Book of the Year - Kindle Book Review, and a runner up in Romance for the Best of the Independent Book Awards - eFestival of Words.

She is a graduate of the Clarion West Writer's Workshop for Science Fiction and Fantasy and Viable Paradise Writers Workshop, and she often teaches the unit on self-publishing at the Taos Toolbox Writers Workshop.When she is not writing or chasing small children, she manages E.M. Tippetts Book Designs, her company which offers formatting, cover design, and editing services to authors and publishers.

The next book, Cleansing Fire's review can be found here


This event was organized by CBB Book Promotions.