This is my stop during the book blitz for The Bro Code by Jacqueline Patricks. This book blitz is organized by Lola's Blog Tours. The book blitz runs from 6 till 12 September, you can view the complete blitz schedule on the website of Lola’s Blog Tours. 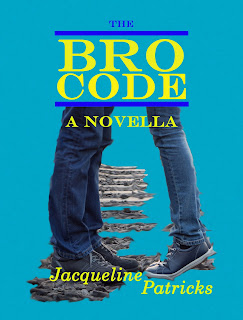 Best friends Jay and Mike live by The Bro Code. Their senior year of college is a time to party and prepare for graduation. It's not a time for relationships with serious girls like Amanda Slate.

Too bad they’re both in love with her.

You can find The Bro Code on Goodreads


A peek into the story!

“I can’t believe you got us an entire pitcher of beer!” Tiffany said before chugging half her
glass, then grinning like a blitzed goofball. “We can’t drink all that!”

“Sure we can.” I chugged the same amount to keep up the team spirit.

But freshman thirty or not, I still outweighed her by an easy forty pounds of muscle. Unlike
Tiffany, I actually enjoyed working out, whether at the student gym or outside—weather
permitting. Tiffany, I suspected by her enthusiastic lifting of the pizza slices, enjoyed working
out her arms and jaw. Before her, I’d never met a girl who could eat as much pepperoni pizza
as me. It was always an impressive sight since most girls ordered a salad, then just pushed the
stupid greens around in the bowl. What? Are they afraid to eat or something? It just food.

That’s one of the things I appreciated about Tiffany, she always enjoyed her food. She was
kind of cool that way.

“You want another slice?” I nudged another delicious grease-filled triangle towards her.

She held her stomach and groaned. “Uh, I shouldn’t.”

She shrugged her rounded shoulders, and her long ponytail bobbed. The fun had left her cute
face, which for some reason bothered me. Tiffany being upset had never bothered me before.

Had she ever been upset before? My frosty beer mug delivered another shot of refreshment as
I gulped. Don’t think about it.

“You really wanna know?” she asked.

Automatically, I nodded and tried to ignore the sudden temptation to watch the sports game
playing on multiple wall-mounted televisions scattered around the room. It was Friday night,
after all, and normal guys were rooting for their teams. What the hell was I doing listening to
Tiffany’s problems?

She chewed her thumbnail and studied the nicked plastic table, which was probably older than
both of us combined. “My mom called me fat.”

“Uh-huh. Said I need to stop eating so much and lose weight or else…”

I leaned both elbows on the table. “Or what?”

She inhaled sharply and chewed harder on her nail. “Or no guy would ever want to … you

Her face turned bright red. “God, Jay, don’t make me say it!” she said in a harsh whisper as
she tucked herself in a tight ball.

Now, I was confused. “Sleep with you?”

“What? No! God, you’re so.” She huffed. “Marry me you idiot.” Her lips trembled and her
flush spread to her neck. She wrung her hands and dropped her gaze.

Oh shit, she’s going to cry. I hate it when girls cry. I never know what to do or say, and I
always feel like it’s my fault, even when they say ‘Oh no, it’s not,’ sniff ‘your fault, Jay’.

Yeah, right. Of course, it’s my fault. It’s always the guy’s fault. Don’t believe it when girls
say shit like that. You probably did or said something really fucked up and totally hurt their
feelings, but she’s too chicken to just tell you. You have to guess it. I fucking hate that. 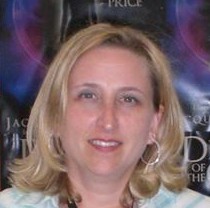 Sign up for my newsletter--free swag, ARCs, updates, and sneak peeks!

As a teen, writing became my passion, and like most aspiring writers, my work was terrible, immature, cliched drivel. I enlisted in the Army, attended college for my creative writing degree,and ended up a paramedic for over 20 years. Currently, I work in safety for a major industrial/construction company. Throughout my life, I've traveled far and pushed myself hard, striving to try almost anything at least once (except skydiving unless the plane is on fire).

I write like I live. Come and explore my imagination.

For a chance to win, enter the rafflecopter below: