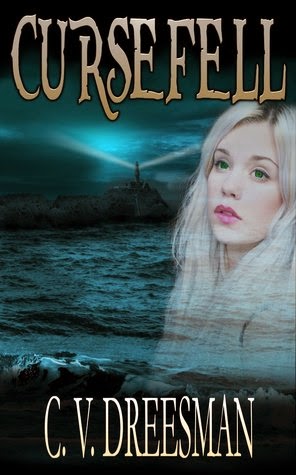 The coastal town of Stonecrest is an isolated haven for nursing wounds and hiding secrets. It can cure a heart or crush it. When one girl's secret is revealed, a curse she does not even know she carries, the safe haven becomes her monstrous prison.


Seventeen year old Nathera Currey sees her curse as a death sentence, or at the very least a sentence of exile. But Thera has experienced death before and survived it. She has felt alone the last year of her life and endured that too. Accidentally uncovering her secret, she becomes the cold light of hope for some and a monster to be feared by others. If she wants to save herself and those she holds most dear, she will have to balance the scales of who she is against what she must become and life versus love.

I received a free copy from the author in exchange for an honest and unbiased review.

The book cover hinted at a mermaid based tale while the blurb didn't give away much about the story. The only clue was that the heroine, Nathera has a secret curse hanging over her. It was all mysterious and that piqued my curiosity. I was right and wrong at the same time, because there are mermaids in it and yet the book is much more. It has an unique plot involving mythical creatures with darker connotation.

The story started off good with the introduction of the other two main characters,Galead and Isabel in addition to Nathera. I found the pace slow at first and the first few chapters were quite descriptive with less dialogues. But the description has a poetic nature instead of being prosy. I found few sentiments were repetitive but it didn't detract much from the story. Almost half of the book was over by the time the true story started. But it was all good since it was leading up to the good part of the book.Then it picked up speed and it was quite hard to put the book down without finishing it first.

The characters have an air of mystery about them which keeps us interested. All their secrets aren't revealed yet. More questions are raised instead of being answered throughout the book. Each character is revealed in steps so they aren't fully developed yet. And I am sure there are more elements to be introduced in the coming books. Nathera is a dreamer who at the same time is willing to make a stand to fight for herself and her friends. Galead is gallant and is in the business of rescuing Nathera which is the only thing revealed about him. Isabel isn't quite the bad character she is portrayed as at first and is the only one whose back story is at least half way written about. Both of them have their own motives to help Nathera.

The world building is pretty cool and mythology is used to a greater degree to build a different world with a negative vibe. This is the second time I am reading about this particular element and that kept me going in spite of the slow beginning. The one thing I didn't like that it ended in a cliffhanger and now I have to wait for the next book to know more.

If you are a patient reader and a mythology lover, this book will appeal to you with its distinctive plot and characters. I will be waiting for the sequel and hopefully it will be out soon!

My one line review : Distinctive mythology based plot makes Cursefell a good start to a promising fantasy series