Book Musings - The Enchanting of an Earl by Emma Locke 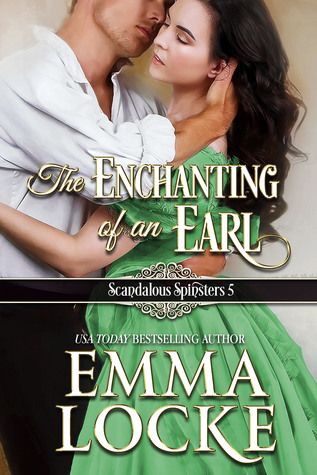 Click the book cover to go to the Goodreads page

The second of five impoverished sisters, Miss Elinor Conley knows her dream of becoming a lady is farfetched. When an unmarried gentleman happens by her brother's smithy, it is up to her to act quickly—and rashly—to secure his interest. But Grantham Wendell, Lord Chelford, isn't in the market for anything more than a new horseshoe. What's a bachelor to do when an innocent miss turns up at his annual bacchanalia? He ought to make her leave, but his Twelfth Night party just became more entertaining...

Publisher's Note: This book was originally published as The Cheer in Charming an Earl

It isn't often I read a book without reading the blurb. This is one such book and I am not doing to do it again any time soon. Regency romances are one of my favourite genres, so when I got this book on Amazon, I blindly started reading it and I should have been warned about the story with the summary included at the start of the book. But did I pay attention to it? No! and I paid for it.

The beginning was quite adventurous with Elinor being determined enough to go after what she wanted,that is, Lord Chelfold. This was quite fine and even her disastrous plan to get his attention was quite funny. What didn't go with the regency times was the vast status difference between the protagonists. This would never go with the time period how much ever I wished it so. Another big plot hole, according to me, was how the hero, Grantham fell for Elinor suddenly and with such force. I understand the concept of love at first sight but this didn't feel like that. Another negative was Elinor's naivety. There is naivety which sounds cute and funny and then there's naivety which just looks like plain foolhardiness which was the case in this tale.

What I did find authentic with the times was the debauchery at Grantham's place. An air of ennui was always a part of the Regency and it added a feel for that era. But the way Grantham's past is entwined with it, also added to the plot quite well.  Elinor's Aunt Millie's estrangement from her family because of her profession was also realistic as per the time frame. And add the fact that Gavin arrived to get Elinor back to the family also added to the plotline quite well. It was a rather short read and it fast forwarded to the end quickly and it felt hurried to me. It was as if the author wanted to end it and the hero had to make do with the heroine's reasons and decide that he can't let her go. There was no time to feel the love or the romance or the emotions of the characters.

In truth, I have never dissected a regency romance as much as this one and I feel quite bad for it. But it fell short on so many points, that I actually thought a lot on whether to write on it or not and to rate it 2.5 or 3. That's why I took so long to write my thoughts on the book. I am just saying the story could have been better. And I am not sure I would read the author's works further. I might once again try a new series of hers in the distant future,though I am not 100% sure.

My one line review : A short regency romance with lots of shortfalls.