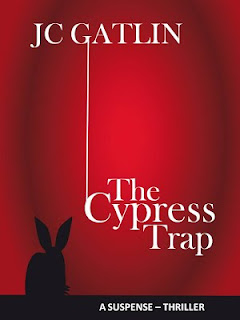 When Rayanne commandeers her husband’s weekend fishing trip, she knows it’ll take work to adjust Owen’s attitude. She has no choice. Since the tragedy, they lost so much. They need to reconnect.

Without her knowledge, Owen texts his best buddy, Daryl, to join the getaway. The three of them aren’t alone in the backwoods of Georgia, though.

Owen took something that didn’t belong to him. Something that changed their lives. And now the owner wants it back. By any means -- including a posse led by a killer dog.

At first, Rayanne is clueless about the item and its value. One thing becomes crystal clear: If it’s not returned, they might not make it home alive.

Surprisingly it was a very short read.

The book started off well with a prologue of a past incident which alerted me to what the story might be about way early. But only half of my guess was right and the other half was a total surprise.

The first few chapters had me reading about Owen and Rayanne and Darryl' relationships. That gave me an intimate look at the characters' traits. The strained relations between the couple, Owen and Rayanne made the perfect background for the real story to start. The cause for the strain was built up well scene by scene and the final revelation wasn't a shocker. I did expect something of the sort to have happened.

What I wasn't able to foresee was the reason behind the attacks, verbal and physical, from the teenagers. The identity of the villain was a surprise too. I was expecting someone else since I formed an impression that he was dead. The chase and the suspense of the main antagonist behind the attacks were beyond what I was expecting. The psychological effect on the main players in the story is the base of the story. It was all based on a superstition. But then, the incidents do coincide with it. I was almost tempted to believe in it. I was literally yelling at Rayanne in my head during the climax to just give him what he wanted. I think she might have believed in it inspite of alleging that she wasn't into it. In short, it was greed which caused all the problems.

The description and the language used made it easy to imagine the place and the incidents taking place in vivid colours. All the scenes leading to the finale had my heart pumping with fear and adrenaline. I was so into the story that I didn't come out of the tale trance until I turned the last page or in my case, came to the last touch of the Page Down button!

Near the end, I realised that though Owen did deserve what happened, he did redeem himself by his heroic efforts. The one character I loved was Luger with his fierce predator vibe. One thing I didn't find realistic was his change from predator to a friend at the end.

So overall, with vivid imagery and a tense plot, I recommend this very fast read ( I was finished in some 3 hours or so ) to thrill seekers. I can see myself trying out other works by the author.

My one line review : A fast read with vivid imagery and tense plot.

Rayanne heard the kids’ voices, and she looked again at the old cars in the bottom of the ditch. The first thing that came to mind was rattlesnakes. But she knew she couldn’t think of that right now.
She got up and headed for the rusted jeep. The hood was gone and it looked like a corpse left to rot in the sun. She glanced at the other cars. There was a hatchback with no doors. A pickup was off to one side, on blocks. The wheels had been removed and the driver’s side door thrown open and left to hang. There was a yellow Volkswagen Beetle half buried in the dirt.
Brown and yellow weeds sprouted up between the wrecks, but the ground was hard and Rayanne knew she had no choice. She raced past the rusting jeep, watching where she stepped.
She moved to the shell of a Volkswagen Beetle. It had two doors. She forced the passenger side open and looked into the dank interior. The overhead lining draped down like a misty shroud. Weeds had grown through the undercarriage and overtaken the floorboards. But two front seats and a long backseat remained. It could be a hiding place, she thought, and squeezed herself into the backseat. She cowered as low as she could.
She held her breath and prayed there was nothing living inside.
She shut her eyes and listened. The teens’ voices grew louder. They sounded like they were coming down into the hollow and she could hear Scut—or was it Roddy—say something about the cars. He sounded excited.
Dru was farther away. Rayanne could hear her calling the dog. Perhaps she didn’t want to walk down into the dump. It didn’t matter. Rayanne knew Scut and Roddy already had.
Their voices echoed, slipping between the cars. One of them said something about the pile of tires and the other laughed. She could hear them moving about, throwing rocks on metal remains, until they stopped right in front of the Volkswagen.
Rayanne stopped breathing.
“She’s hide’n here somewhere,” Scut was saying. He threw another rock and it hit the bumper. The sound reverberated through the Volkswagen, and Rayanne shivered.
“Naaaah,” Roddy said. It sounded like he was walking away. “I don’t think so. She’s a woman. She ain’t gonna come down here.”
“We’re not leav’n till we search every car.” Scut sounded like he was stepping away too. She could hear him throwing rocks at other cars now.
Rude Roddy was saying something when one of them screamed. For a second Rayanne thought Dru had made her way down into the dump. She was surprised to learn it was Scut.
“There’s a rattler! There’s a rattler!” Scut’s high-pitched wail echoed through the hollow, and she heard what sounded like some kind of skirmish. Perhaps an avalanche of gravel rolled down the slopes of the hollow, like marbles beneath their feet.
“I hate snakes! I hate ’em!” Scut’s voice rapidly moved away, and it sounded as far as Dru’s now. The girl asked them what was wrong.
They had to have climbed out of the hollow, Rayanne thought. She opened her eyes. She wanted to poke her head up, but didn’t dare.

Coming from a large family with five brothers, JC Gatlin grew up in Grapevine, Texas, a small town outside of Dallas. In 1999 he moved to Tampa, Florida, where he now resides. JC’s fishing trips help him breathe authenticity into his stories, which feature the rich landscapes of Texas and Florida as backdrops.

He has written a monthly column in New Tampa Style magazine and penned several mystery-suspense stories. His first, The Designated Survivor, was published in 2013. JC invites you to visit his mystery writing blog at jcgatlin.com.