Book Blitz - Love in the Time of Murder by D.E.Haggerty 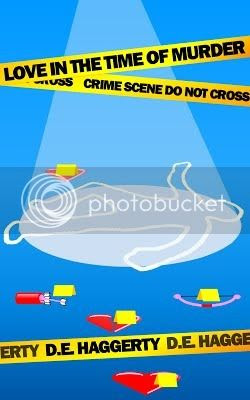 In Love in the Time of Murder, the Gray-Haired Knitting Detectives face their toughest case yet. Delilah, or Dee as she wishes everyone would just call her already, is the granddaughter of one of the knitting detectives and her life is in a bit of a shambles. She finally manages to pry herself away from her husband’s clutches, move out on her own, and start her own business. But then her estranged husband is found dead and she’s the number one suspect. The Gray-Haired Knitting Detectives aren’t about to let one of their own get sent to the slammer and jump at the chance to search for the true killer. As if Dee doesn’t have enough problems, the knitting detectives decide that Delilah being a widow is the perfect opportunity to find her a new man and decide to put their matchmaking skills to use. Will Dee end up in prison for a murder she didn’t commit or will she be taking another walk down the aisle?

Everyone stops talking when I enter the kitchen. Oh great a confrontation. I do so love confrontations; especially when I’m dressed in sleep shorts and a tank top with no bra. It gives me no end of confidence to confront people with my boobs hanging out.

“You can hit Noel if it makes you feel better,” Izzy offers and Noel just shakes his head at her.
I have no idea if she’s serious or not. “Um no, I don’t believe in violence.” Obviously.
“Pick me. Pick me!” Jack shouts as jumps up and down with his hand raised in the air. “I would love to get my hands on Noel,” he says in a provocative voice and winks outrageously. I can’t help but laugh. Damien reaches over and smacks his hand down. “Behave or I’ll throw out your secret Ben & Jerry’s stash.”

“The grandmas scare you? They’re a bunch of old ladies that go to church and knit together. What’s scary about that?”
Tommy shakes his head. “You have no idea what they’re capable of.” I shrug. Is he serious? “They put ex-lax in the brownies at church!”

Jack shakes his head at me. “You don’t know me yet but know this – I don’t lie. If I didn’t think you were beautiful, I’d be talking about your clothes. Which are atrocious by the way. You do know we have an employee discount, right?”

The detective shakes my kindle. “Why are you obsessed with true crime novels, Mrs. Clark?”
I snort. “I also read shifter romance novels, but I’m pretty sure I’m not a werewolf.” And with that, I’m done. “Am I under arrest?”

“Shoot! I’m going to fry for Brock’s murder.”
“Don’t be ridiculous,” Damien speaks for the first time. “They don’t use the electric chair in Oklahoma. It’s lethal injection.”

“Oh my gosh, this place is fancy,” gushes Martha as we walk in. She notices a few women working at desks behind the glass wall separating the waiting room from the main work floor. “Do you think there are any single gals working here? Bobby needs a wife.” Her eyes zoom in on the receptionist and she marches right on over to her. “Hi! I’m Martha. I’m a matchmaker. Are you single?”

The bouncer shakes his head. “Um no, I can’t let you in.” He points to Grandma and her posse. “They are instant boner killers. Not good for business, man.”
Betty huffs. “You’re going to let in two gay men but not us?”
He shrugs. “I don’t care if the gay dudes want to make a stripper sandwich. But the customers are going to run out of here like their asses are on fire the second this AARP bus arrives.”

I was born and raised in Wisconsin, but think I’m a European (and have the EU passport to prove it!). After spending my senior year of high school in Germany, I developed a bad case of wanderlust that is yet to be cured. My flying Dutch husband and I have lived in Ohio, Virginia, the Netherlands, Germany and now Istanbul. We still haven’t decided if we want to settle down somewhere – let alone where. I’m leaning towards somewhere I can learn to surf even though the hubby thinks that’s a less than sound way to decide where to live. Although I’ve been a military policewoman, a commercial lawyer, and a B&B owner, I think with writing I may have finally figured out what I want to be when I grow up. That’s assuming I ever grow up, of course. Between playing tennis, running much slower than I would like, trying to adopt every stray dog within a 5-mile radius, traveling to exotic new locales, singing off tune, drinking entirely too many adult beverages, addictively watching new movies and reading books like they are going out of style, I write articles for a local expat magazine and various websites, review other indie authors’ books, write a blog about whatever comes to mind and am working on my seventh book.