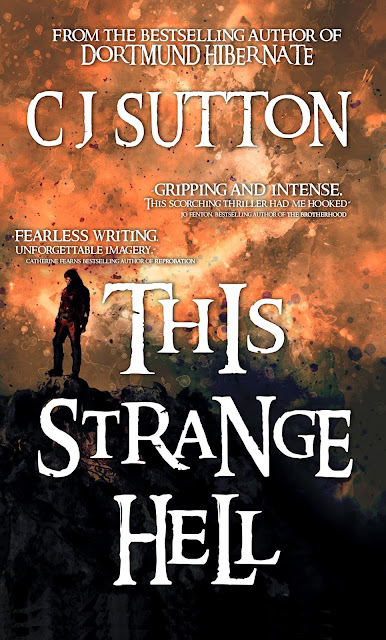 This Strange Hell
A suited man runs from a burning tower in Melbourne as bodies rain down upon him.

Before the city’s millions can compose, he boards a train into the countryside. Hiding his identity and changing his appearance, the man finds his way to Sulley Ridge, a lawless town in the heart of the harsh Victorian outback.

The following day, a burned man wakes up in a hospital bed. Surging with rage, he speaks a name. Within an hour, the suited man’s face is across every screen in the country. It’s the greatest manhunt Australia has ever seen.

But as he tries to camouflage in Sulley Ridge, he soon realises the town has its own problems. Under the iron fist of a violent leader, the locals are trapped within slow and torturous decay…

As we learn more about the night of the burning tower, the connection between the suited man and the burned man threatens to leave a trail of destruction across the state.

Here is the story of a man on the run from his past, as the line between sanity and evil is danced upon.

Here is the tale of This Strange Hell.

I almost gave this book a miss because of the cover. It really didn't grab my attention. But the blurb did its job, getting me to take a second look. I am glad I looked beyond the cover since I enjoyed the mystery involved in the plot.

The story started with a man running from the past and a burned man who started a man hunt. The plot is really conducive to being an enjoyable read though there were few things which irked me. The words referring to the characters like 'The man, That man' were repetitive and I felt they could have been avoided. Another thing was that few scenes were unnecessarily dragged out. Other than that, I really liked the story.

The mysterious start kept me going till the end what with the "stranger's" past and his current woes. There was plenty of action and violence to keep me glued to the seat. The writing had me imagining the plight of the people and the author took me on quite a journey. The characters were plotted out in such a way that I, as a reader, was intrigued and scared of them at times. At the end of the book, I took a while to digest the story.

I might repeat this and read another book of the author's if I get a chance.

I received a copy which doesn't impact my review in any way.

Author Bio –
C.J. Sutton is a writer based in Melbourne, Australia. He holds a Masters in journalism and creative writing and supports the value of study through correspondence. His fictional writing delves into the unpredictability of the human mind and the fears that drive us.

As a professional writer C. J. Sutton has worked within the hustle and bustle of newsrooms, the competitive offices of advertising and the trenches of marketing. But his interest in creating new characters and worlds has seen a move into fiction, which has always pleaded for complete attention. Dortmund Hibernate was his debut novel, released by Crooked Cat Books on July 18. It is available now - mybook.to/dortmundhibernate

His new novel, This Strange Hell, will be released on March 15.